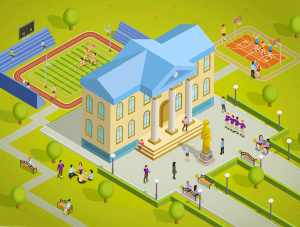 All over India, businesses, NGO’s and philanthropists spend huge amounts of money to build institutions. However, many times, out of ignorance or due to wrong choice of architect, the fundamental principles of Institutional Vastu are ignored. It is highly recommended that such places should have their entrances in East or North east direction. And therefore, Vastu for Institutional Buildings should adhere some of the below mentioned thumb rules.

Come to us for your Vastu for Institutional needs. We have tied up with professional vastu experts who specialize in niche areas of this age old Hindu system of architecture.